What is motor end plate: 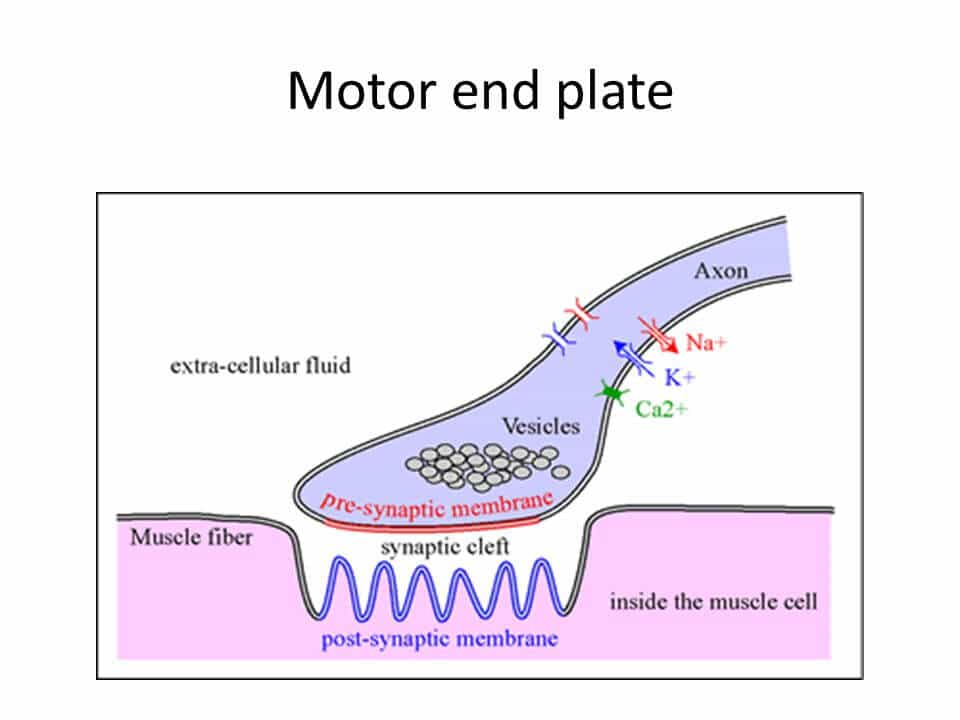 Parts of the Neuromuscular junction:

There are 3 parts of the neuromuscular junction. They are the presynaptic neuron (motor neuron), synaptic cleft and the motor end plate. Let us discuss all of them.

This is the part of the motor neuron that ends in a bulb-like structure. Each nerve cell has a cell body and certain branches. The branches that convey a signal to the nerve cell are called dendrites and they are many in number.

The branch that carries message or signal away from the nerve cell or neuron is called the axon. The axon is only one. At the end of the axon, there is a bulb-like swelling. This swelling is called the presynaptic end bulb.

Inside the Presynaptic bulb, there are many vesicles. These vesicles are filled with a chemical substance called Acetylcholine.

When the presynaptic neuron becomes excited or depolarized due to the entry of the sodium ions, the vesicles fuse with the membrane of the presynaptic bulb and release the Acetylcholine into the synaptic cleft. This process is called Exocytosis.

Subneural clefts are also known as palisades or sub neutral apparatus or secondary synaptic clefts. They are the many folding of the sarcolemma membrane. They increase the surface area of the motor end plate.

READ  Headache behind eyes-13 Causes and 14 Treatments or Remedies

Then this positively charged sodium and calcium ions depolarize the muscle fiber or motor end plate. There is also a structure called sarcoplasmic reticulum in the motor end plate.

When the motor end plate is depolarized, the sarcoplasmic reticulum is activated and it also releases the stored calcium ions in it.

Diseases which affect the Neuromuscular junction and the motor end plate:

The muscles controlling eye movements, swallowing, head and neck, respiration is all skeletal muscles. So, they don’t function properly in Myasthenia gravis.

So, there is the weakness of muscles of the face, head, and neck. There is drooping of eyelids or ptosis and also double vision or diplopia due to impaired eye muscles.

READ  Tingling in back: Causes, Diagnosis, and Treatment

These people suffer from difficulty swallowing or dysphagia due to affected swallowing muscles. They also experience voice changes or problems like dysarthria and hypophonia due to impaired muscles of the larynx.

If the condition becomes severe they might also suffer from respiratory distress and death due to respiratory failure. This is because of respiratory muscles area also skeletal muscles.

Neonatal Myasthenia gravis is seen in neonates born to mothers having Myasthenia gravis disease. This condition is caused when the antibodies blocking the Nicotinic receptors are transferred from the mother to the fetus through the placenta.

The neonates also have a weak body and they are unable to move due to blocked Nicotinic receptors. They need to be given drugs to treat Myasthenia Gravis. Otherwise, it can even lead to the death of the fetus.

Some other diseases of the neuromuscular junction:

Now, we also know the diseases caused due to defects in the motor end plate. Let us learn about another disease of the nervous system in our next article.

Tingling in head: 15 Causes and Treatment

Headache behind eyes-13 Causes and 14 Treatments or Remedies

Tingling in back: Causes, Diagnosis, and Treatment